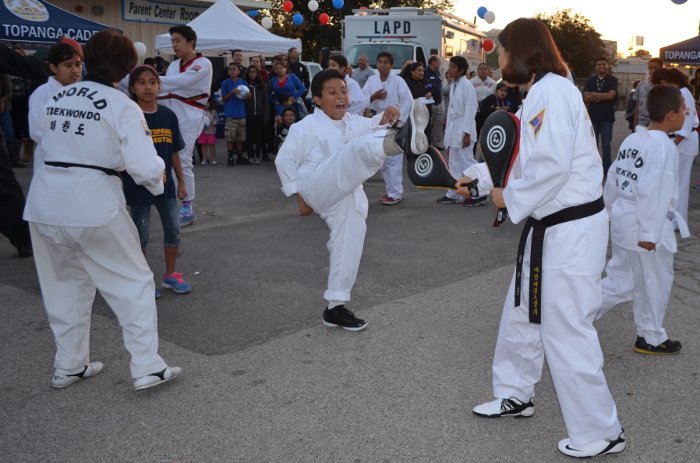 The Topanga Police Activities League was founded in the spring and quickly outgrew the police station. The Youth Center will now host Topanga’s youth programs, including the PAL and cadet programs.

Capt. Jorge Rodriguez said the after-school programs allow kids to have fun and stay out of trouble. The students work with mentors and participate in art, sports and homework classes.

“We can give them opportunities they won’t experience on the street,” he said. “We want to give them an opportunity to get out of the house too.”

The Youth Center is located in two bungalows at the rear of the high school. Rodriguez said moving to the high school gives them access to the sports fields and other resources.

The Topanga youth programs run from about 1:30 to 6 or 7 p.m. each weeknight. More than 230 students participate in the activities.

Within the next week, they are adding a wrestling program and music classes. They also have a program where kids learn how to fix their bicycles and can work toward earning a free bike.

The Topanga Division also teamed up with the Grab a Ball and Play Foundation to give away more than 300 soccer balls, basketball and footballs. Sports Authority donated 300 balls and agreed to partner with the organization as it spreads to other cities.

“We’re really excited. Each day we get more momentum,” Schneider said. “Everybody understands what this is about.”

She said the initiative has attracted interest from other organizations and cities across the country.

“When you give a kid a ball, you give him a dream,” she said. “Who hasn’t pretended to be Michael Jordan making a game-winning shot?”

Rodriguez said the PAL programs are free and do not cost the community money. Students are only asked to provide their report cards so the mentors can see where they need help.

The programs are open to kids 8 to 20 years old. Rodriguez said they do not have a limit for how many children can join. They hope to accommodate every kid who wants to participate.