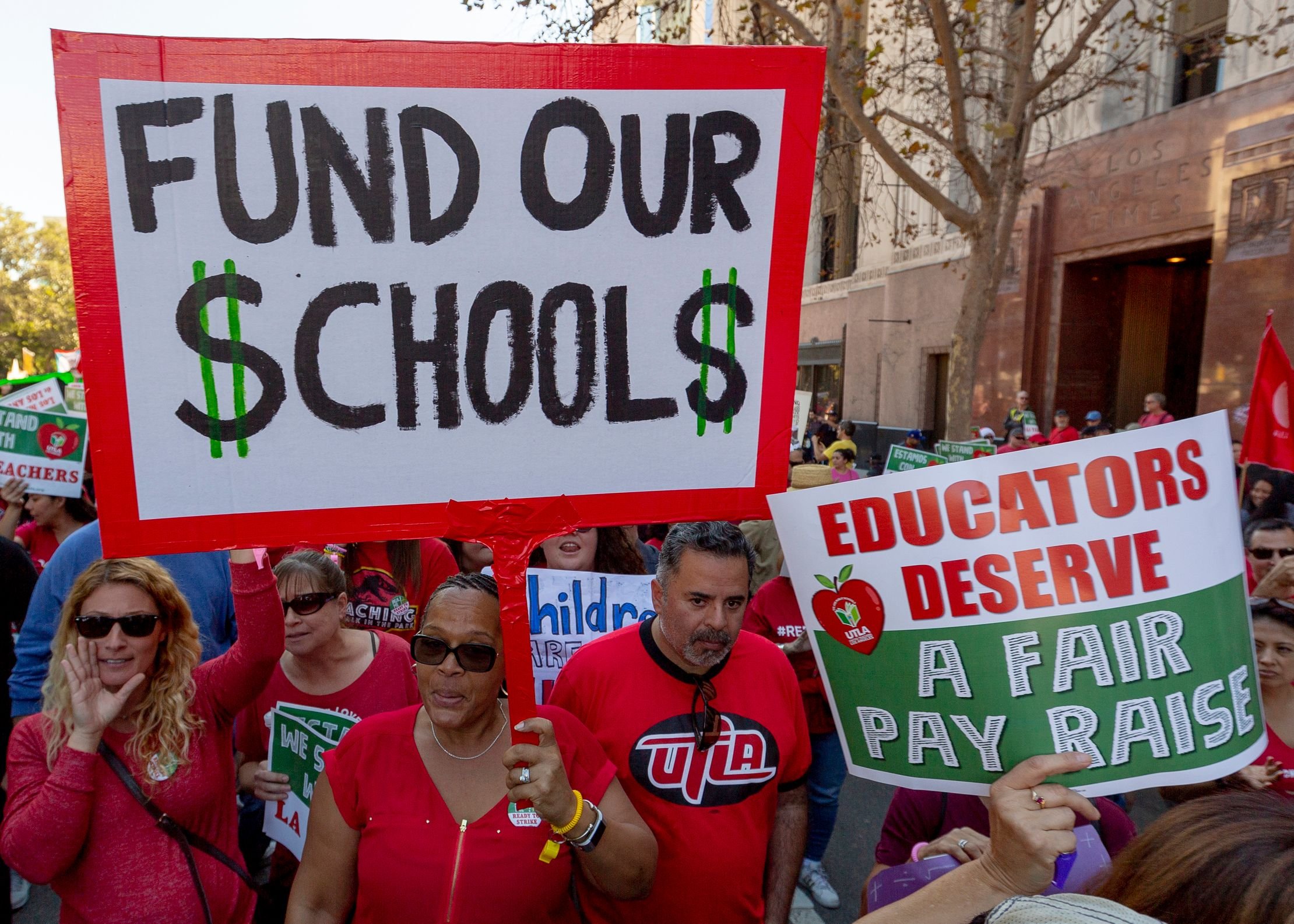 “A vast super-majority” of teachers have voted to to accept an agreement reached Tuesday, ending LA’s teacher strike.

Union leaders and administrators with the Los Angeles Unified School District announced a deal Tuesday that could send teachers back to the classroom Wednesday, ending the first Los Angeles teachers strike in 30 years.

UTLA teachers went on strike Jan. 14, calling for smaller class sizes and the hiring of more support staff, such as nurses, counselors and librarians, and a pay raise. Beutner said during the standoff with the union that its demands would cost billions of dollars and bankrupt a district already teetering on insolvency.

The new proposal was voted on by UTLA members on Tuesday, and teachers will return to work Tuesday. The LAUSD Board of Education also needs to formally approve the deal.

“The strike nobody wanted is now behind us,” Beutner said at the City Hall news conference, reflecting confidence that the deal will be approved.

But he also cautioned: “We can’t solve 40 years of under-investment in public education in just one week or just one contract. Now that all students and our educators are heading back to the classroom, we have to keep pour focus and pay attention to the long-term solutions. … The importance of this moment is public education is now the topic in every household in our community. Let’s capitalize on this. Let’s fix it.”

“We have seen over the last week something pretty amazing happen,” Caputo-Pearl said. “We went on strike in one of the largest strikes the United States has seen in decades. And the creativity and innovation and passion and love and emotion of our members was out on the street, in the communities, in the parks for everyone to see.”

The proposal also outlines a phased-in reduction of class sizes over the next three school years, with additional reductions for “high needs” campuses.

Caputo-Pearl said the issue of class size is a key element of the pact. He said the district agreed to eliminate contract language he dubbed an “escape clause” that would allow the district to increases class sizes in the future.

A main thrust of the union’s strike was a call for increases in the number of nurses, counselors and librarians at campuses. According to the district, the proposed agreement’s provisions for reducing class sizes and hiring nurses, librarians and counselors will cost an estimated $175 million from 2019-21, and $228 million for 2021-22.

It was unclear exactly how the costs will be covered. Garcetti said the deal’s various provisions will include a combination of funding or other support from the state, county and city.

The county Office of Education, which oversees the district and has raised questions in recent weeks about the LAUSD’s financial stability, will have to review the proposed deal.

“Our obligation is to ensure that the district has a funding plan in place to cover the costs associated with this agreement, and thereby able to remain fiscally solvent,” county Superintendent Debra Duardo said in a statement. “Now that a tentative agreement is in place, the Los Angeles County Office of Education has the legal obligation to review and provide comments before the LAUSD governing board takes action.

“While the statute provides a window of 10 working days, we intend to provide these comments as soon as possible once we receive the relevant data,” Duardo said.

The proposal also calls on the district to support a statewide cap on charter schools and to provide regular reports on proposed co-locations of charter and public school campuses. The deal also calls on the mayor to support a ballot initiative going to voters in November 2020 that would roll back Proposition 13 property tax limits on commercial buildings to increase state tax revenue for public education.

“We have seen over the last few weeks the way that the city has rallied around public education, and quite frankly it’s been breathtaking; it’s been inspiring to see,” Garcetti said.

Just before the strike began, Beutner said the district’s latest contract offer to the union “represents the best we can do,” but of the new deal, he said Tuesday that “this does even more” than the previous one.

The union had vocally disputed the district’s claim that it could not afford more extensive investment in school staffing, pointing to what it called an estimated $1.8 billion reserve fund and insisting the district has not faced a financial deficit in five years. The district contended that reserve fund is already being spent, in part on the salary increase for teachers.

Caputo-Pearl, who stood next to Beutner during the news conference, was asked about his past comments in which he harshly criticized the superintendent while accusing him of lying about the amount of money the district has available, and being dedicated to privatizing schools. The UTLA president was also asked if he could trust Beutner to follow through on the deal.

“We have, Austin Beutner and I, we certainly have our differences, and we’ve expressed those, and I think we will continue to express those. But what we’ve been able to do over the last chunk of days is work together with a bunch of partners and a bunch of help to forge an agreement that we are both committed to making sure is implemented, to make sure that our students are served and our schools are improved,” Caputo-Pearl said.

He added, “We are building trust, and the last several days have helped on that.”

Garcetti quipped that “I’m not saying that everybody is going to go and have a beer today, but I do think that this is a new chapter.”

The second-largest school district in the nation, the LAUSD covers 710 square miles and serves more than 694,000 students at 1,322 schools, although 216 schools are independent charter schools, most of which were being staffed with non-union teachers unaffected by the strike. The district says about 500,000 students have been affected by the walkout.

District officials said the UTLA strike, which kept teachers out of classrooms for six school days as of Tuesday, had cost the LAUSD at least $125 million in attendance-based state funding. That amount is partially offset by an estimated $10 million per day by the salaries that were not paid to striking teachers.